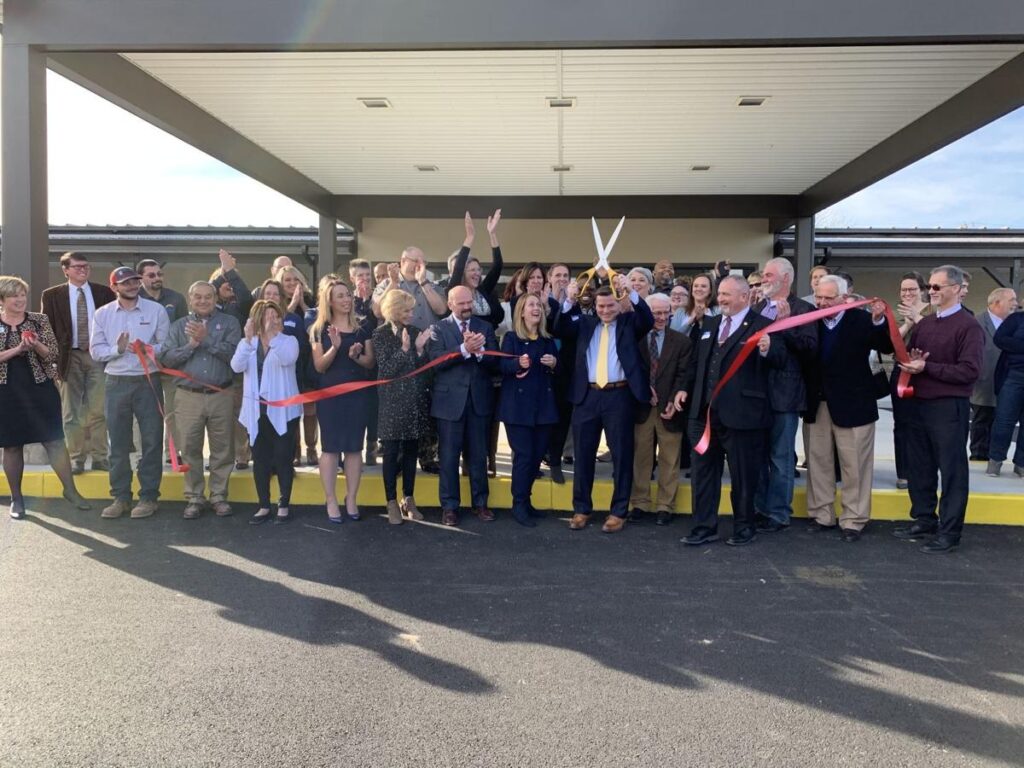 MARTINSBURG â€” Kevin Knowles summed up his feelings about the opening of the Mountaineer Recovery Center Friday in a simple sentence.

Knowles, business development chief for the Mountaineer Recovery Center, spoke those words to the roughly 350 people in attendance Friday afternoon during the long-awaited ribbon-cutting ceremony for the new treatment facility.

â€œThereâ€™s a lot of us in this room that started this battle around five years ago to get treatment here in the Eastern Panhandle,â€ Knowles said. â€œAt the time, we thought this was going to be an impossible task but, as we are Berkeley â€˜Countians,â€™ we are very fortune to have some great leaders here who put their head on the block to push things through, and this is one of the results of that. For myself, itâ€™s been a long road, but the main goal for everybody here isâ€¦ we help hope become reality, and the experiences weâ€™ve had are going to help carry some people on to a much better life.â€

The great room was packed wall to wall as community members and those impacted by the opioid epidemic wreaking havoc through the state and nation joined in prayer and cheers at the sight of the Mountaineer leadership celebrating the opening of this â€œmuch-neededâ€ treatment facility.

â€œWhat an incredible turnout. It speaks to the community role that is so necessary in the healing journey from the disease of addiction,â€ Jonathan Hartiens, CEO of Mountaineer Recovery Center, said. â€œToday is quite an emotional day for so many reasons, and one reason is because it has been such a long journey to get to this point todayâ€¦ but also because of all of the hope that is going to be generated. Iâ€™m very excited about the reality that with the absence of this place, people would have died that now will not. And Iâ€™m so very thankful for that.â€

Tears continued to flow from the eyes of those in the audience as the ceremony highlighted the real pain and suffering of those in the community who had been impacted by addiction.

â€œIf you knew me eight years ago, you probably never saw me shed a tear, but today and many days in my life since eight years ago, I cry for the ones who will be impacted by a facility like this, I cry for those who didnâ€™t get a chance to have a facility like this,â€ Doug Copenhaver, Berkeley County Council president, said through tears. â€œIt doesnâ€™t matter who you areâ€¦ my wife and I did lose our son, because he didnâ€™t have a set of doors like this.

â€œHeâ€™d end up in trouble with alcohol, he went to jail, and the problem with jail was he got further educated in the wrong direction. The last time it was my job to take him to jail, and I said, â€˜Son, you have to turn yourself around or itâ€™ll get really bad,â€™ and he said, â€˜Dad, I do have another choice.’ I thought I knew what he was talking about, but the pain he was dealing with was so bad, he thought his only way out was to take his own life. Thank you for what youâ€™re doing here, thank you for making sure no other individual has to go through the suffering that [my son] did and may not one more person die from drugs.â€

Tears were shed when, during the ceremony, Hartiens and Knowles announced the great room in the center of the facility would be named the Ryan Brown Great Room in honor of the son of Cece and Bobby Brown, who were instrumental in creating the Ryan Brown Grant, The grant funded $3 million toward the completion of the Mountaineer Recovery Center.

Fridayâ€™s event closed with the entire staff of Mountaineer Recovery Center and those in attendance cheering in the centerâ€™s parking lot as Hartiens cut the ceremonial ribbon, officially opening its doors.

According to Knowles, Mountaineer Recovery Center is a 48-bed facility that has been in the making for years.

The length of stay and location of the new facility will allow individuals to remain in treatment for a full 28 days and better meet the needs of those in the Eastern Panhandle, Knowles said.

One half of the facility is an intensive inpatient facility with a 24-hour nurseâ€™s station, bedrooms fit for two â€” and three or four in a few cases â€” separated by gender and four recovery coach offices where the same 12 people will work through their programming together.

The inpatient half of the center also features a â€œlibraryâ€ hallway and seating area to encourage reading.

Knowles said this allows case workers and patients to get to know one another well and get more form the services provided by the center.

Programming at Mountaineer Recovery Center includes group therapy, recreational outings, connecting with the community, 12-step groups and life skills training, all of which Knowles said is aimed at helping those in treatment get back on their feet and prepare them for their time after treatment.

Once they have graduated the program, Knowles said the center moves them to the other half of the building to the intensive outpatient treatment center where individuals will continue to be monitored on a four-month program that provides them three hours of education and group therapy three days per week with regular visits with medical professionals, Knowles said.

It is through this outpatient programming that Mountaineer Recovery Center has teamed up with Semper Liberi, a local organization that works with those who have graduated the program

Knowles said he hopes this facility will set the standard for the state in terms of treatment centers, and said he can see potential expansions to better serve a wider variety of individual in the future.

Knowles said the first 12 inpatient patients will move in Monday morning and the center will continue to accept 12 patients a week until the center reaches capacity.

The outpatient side of the center has already begun seeing patients.