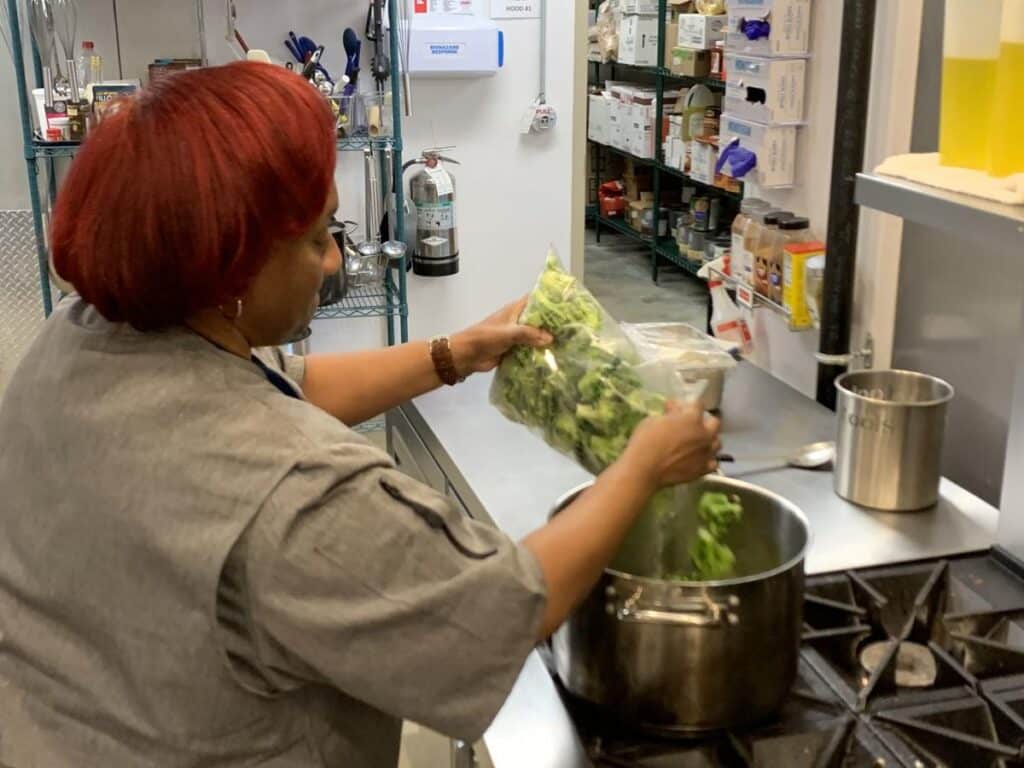 Local chef helps those in recovery through food

MARTINSBURG â€” If you had told Scott Anderson 20 years ago he would be hip deep in giving back to the community as a hospitality chef for a local recovery center, he would have said you were crazy.

However, when you walk through the front doors of the newly opening Mountaineer Recovery Center in Kearneysville and slip back into the stainless steel kitchen, the aroma of freshly cooked food, the sound of laughter and the towering figure of Anderson welcome you to one of the more unique recovery therapies provided by the center.

Anderson said he started cooking when he was a teen in the 1980s, when his grandmother and great grandmother taught him to cook by feel, taste and smell versus cooking by recipe.

â€œAnd then my mom kind of allowed that to blossom by leaving the kitchen so I could do it, and she could just come by when the dinner bell was rung,â€ Anderson laughed. â€œLearning that way, cooking became a huge part of my life. I started my professional cooking career, we could say, at The Public House restaurant in New Jersey.â€

According to Anderson, the high production nature of the bed and breakfast forced him to learn quickly and hone his multitasking skills. Ultimately, the demands of the position led to Anderson feeling burnt out, and he entered academia, where he earned his bachelorâ€™s and masterâ€™s in history and political science.

With real-world issues suddenly very real to the fresh graduate, Anderson said he moved to Shepherdstown, where his parents had settled, and began working at the Canterbury Shepherdstown nursing home.

â€œI worked there for two years, and thatâ€™s where I first really thought about how cool it is to help people and cook at the same time,â€ Anderson said. â€œI had wanted to go into historyâ€¦but all these positions kept opening in food service for me, so I ended up getting hired on as a catering employee at Shepherd University in 1990, and I was with them until Jan. of 2017, where I went from assistant catering employee to assistant director of the dining operations.â€

Anderson said while his university position taught him a lot, he couldnâ€™t turn down the opportunity that arose to be more involved with the community by teaching people how to cook. West Virginia University Medicine hired Anderson as adjunct faculty, where heâ€™s the only person in the program who is not a doctor, though he said he is often called the â€œfood doctor.â€

In the system, Anderson said his desire to give back to the community as much as possible was satiated as he works with WVU Med Chefs, visiting food pantries, town halls, facilities like the recovery center and farmers markets to host classes teaching the community to cook for themselves healthily, on a budget and ultimately stop â€œdriving around to the second window.â€

Anderson said he still felt he could do more and ultimately became part owner of the Community Garden Market in Shepherdstown.

Years in the making and almost by a grander design, according to Anderson, Jonathan Hartiens, CEO of Mountaineer Recovery Center, spoke with Anderson in 2018 about joining the center after Andersonâ€™s father recommended him to Hartiens.

â€œI enjoy being able to take a menu, a food item or leftovers and show people how to take odds and ends and turn it into a meal,â€ Anderson said. â€œWithin a couple weeks, we were able to get the patients into a program called 3.5 Extended, which allows them to come into the kitchen here at Mountaineer Recovery four days a week for an hour a day where we do cooking skills, knife skills, sanitation and much more.â€

In addition to teaching basic cooking skills, Andersonâ€™s class allows in-patients to acquire their serve safe food handlers training certificate, allowing them to have a nationally recognized certificate that can be used to get a job once patients leave the facility.

â€œPeople know what they want to do or eat, but they donâ€™t have their mind open to how they can do it, so Iâ€™m the conduit of this is what youâ€™d like to be and how do I get you there with food and your medicines and your therapy, tying it all together as one,â€ Anderson said. â€œAs I look back, from restaurants, to Med Chefs, to the market, if you were to tell me 20 years ago I would be running a hospitality center at a recovery clinic, I wouldnâ€™t have believed you, but each step of the way, I can see how God was preparing me and taking me little steps to where I am now.â€

Anderson said he wouldâ€™ve thought he would be cooking in a restaurant or owning his own, but he said it seemed he kept getting more into teaching and doors would open to help people in need.

â€œIt gives back to people, because food is medicine,â€ Anderson said. â€œIt makes a difference because you can see when the light clicks, the sense of accomplishment that they have is great. I want it to be fun and infectious, not stuffy and pretentious. I donâ€™t need to teach them to do a fancy, extravagant meal, but theyâ€™d like to know how to cook veggies, how to make sure food comes out at the same time and how to do it all on a budget. And thatâ€™s the idea, weâ€™re trying to tie it up and they know exactly what to do with what they have. Its cooking, budgeting and making it happen.â€

According to Anderson, his cooking classes are not mandatory, but encouraged, and the program is the first of its kind heâ€™s seen in a recovery center, stating heâ€™d been to similar facilities that had the means but had simply never thought to offer it as another way of helping people with addictions recover. While Anderson said his work giving back to those in need through food is something he feels grateful for, he is not the only one impacted by the class.

Anderson said heâ€™d been thanked by multiple graduating students, with one writing him a two-page letter of appreciation, stating how this program had allowed them to feel in control again and like they had something to focus on instead of their addictions.

â€œTwenty years ago, I wouldnâ€™t have thought thisâ€¦ you get up in the morning, youâ€™re excited to go to work. Itâ€™s a good thing theyâ€™re here getting recovery and that we can spend time with them and help them continue that recovery by giving them just another litter edge up when they are on their own again,â€ Anderson said.