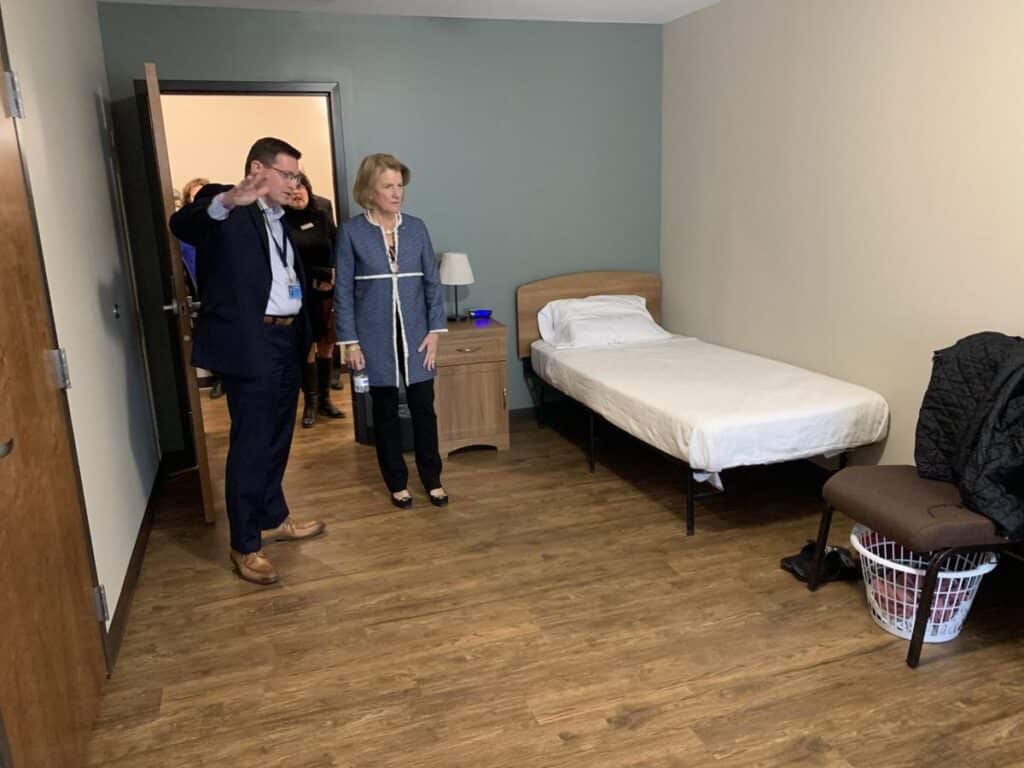 MARTINSBURG â€” The opioid epidemic and the unique stories of those working toward recovery were showcased Monday morning when a United States Senator made a stop in the Eastern Panhandle to tour and talk about local recovery efforts and the lives they save.

Senator Shelly Moore Capito, R â€“ W.Va., toured Mountaineer Recovery Center and spoke with its inpatient residents about the care they receive in the new facility as well as the things those residents would like to see Capito do on a federal level that could benefit recovering addicts while in recovery and on the other side of treatment.

â€œIn 2015 when I first became the Senator for West Virginia, I had the White House Office of Drug Control Policy and High Intensity Drug Task Force, we had a big meeting here in the panhandle and the repetitive issue that kept coming up in the meeting was there was no residential treatment in the Eastern Panhandle,â€ Capito said. â€œEverybody has to go to Huntington, Charleston, or even some going down to Roanoke, and youâ€™re away from your families, your support systems that youâ€™re going to return to, the areas where you feel comfortable. So that was pointed out as a major issue in the panhandle so I want to say congratulations to the local folks to get a facility like this.â€

Capito said sheâ€™d been in and around many treatment facilities in the state, and it was the graduatesâ€™ stories that touched her heart and reminded her of the work needed to be done to help those in recovery through the transitional phase after treatment, including getting education, continuing treatment and getting jobs.

â€œA lot of it’s about money, and in order for us as a state â€” because we have a small population â€” to really drive the money into the state, we werenâ€™t getting what I would think would be significant enough to make a difference because we donâ€™t have a big enough population,” Capito said. “I joined with the other Senators from New Hampshire to say weâ€™re the states that have the most intense problems, which are measured, can we have a 15% carve out for that and we were able to get that. That is a difference of $50 million to our state.â€

Capito opened the floor to comments from residents, encouraging them to share their stories and requesting they offer any comments or suggestions on what she can do to further help them in their recovery.

One resident asked Capito if, at a state and federal level, efforts were being made to address educational help for those in recovery once they leave treatment facilities.

According to Capito, she would be interested in working to see if grant and scholarship funds could be created or collaborated within the Eastern Panhandle similar to the Hope Fund, a Fruthâ€™s pharmacy scholarship fund for those in recovery near Charleston and Huntington in the southern part of the state.

Residents also requested Capito speak a bit on stigma and ways the public can be further educated about addiction.

Capito said stigma is the trickier topic when it comes to addiction but sharing stories, traveling the state, working on preventative and educational efforts in the schools and highlighting as many efforts similar to those being made in the Eastern Panhandle like Mountaineer Recovery Center is how the stigma is addressed and eventually broken down.

In addition to suggestions and requests made by patients regarding post-inpatient help, multiple residents shared their beliefs that the care and love theyâ€™ve received at Mountaineer Recovery Center has saved their lives and they feel the staff truly understands their struggles and wants to see them succeed.

Capito, along with representatives from her office, and officials with the recovery center, including Jonathan Hartiens, CEO, toured the facility following her speaking engagement. On the tour the facilityâ€™s patient rooms, therapy rooms, chapel, kitchen and outpatient clinics were highlighted.

Residents also shared their excitement that this facility opened in the Eastern Panhandle, allowing many parents to stay local and get visits from their families while getting treatment for their addictions.

After her tour of the recovery center, Capito conducted a pinning ceremony at the Martinsburg VA Medical Center, including Welcome Home pins to a large group of Vietnam veterans.

According to Capito, she is the only federal representative in the state who awards Welcome Home pins to Vietnam veterans. She started awarding them in 2012.

â€œWhen they came home they were discarded, they werenâ€™t welcomed home like we welcome home our veterans now, I hope our nationâ€™s learned a big lesson,â€ Capito said. â€œSo this pin was created basically to say â€˜welcome home, you werenâ€™t welcomed home properly fifty years ago, I want to welcome you home now, hereâ€™s special pin.â€™ This is just a very small token of our appreciation to them from me, as a grateful citizen, but also from our nation.â€