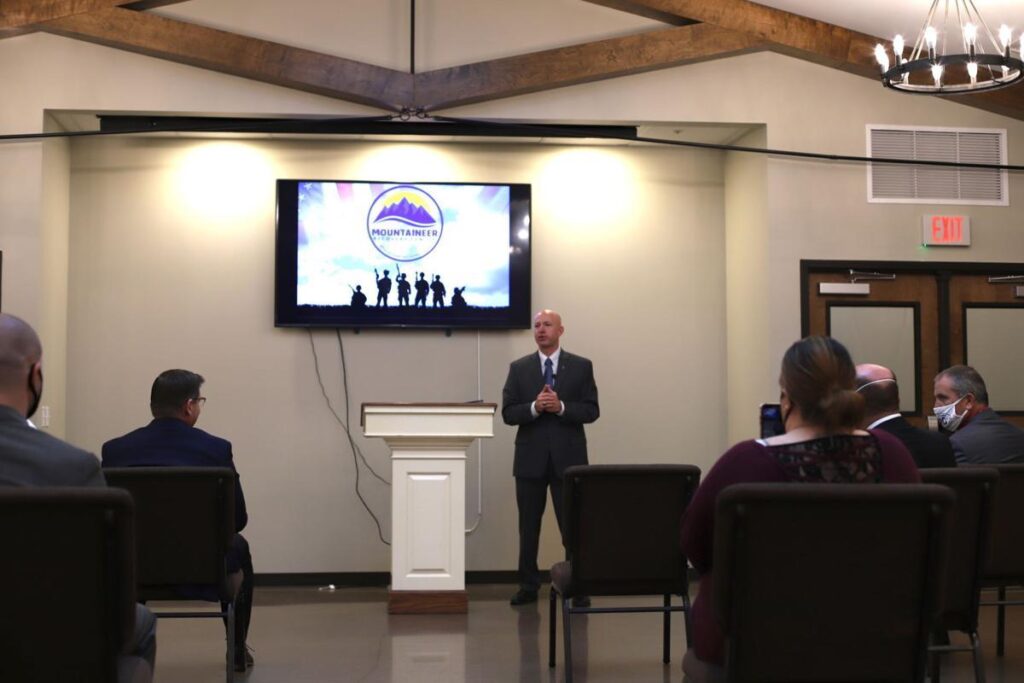 MARTINSBURG â€” Acknowledging the difficulties both veterans and those who struggle with substance abuse face every day, leadership with Mountaineer Recovery Center honored service men and women in a Veterans Day ceremony preaching hope and the promise of a brighter tomorrow.

Welcoming those residents and few members of the public invited into its halls with a flag presentation by the Berkeley County Schools Air Force JROTC, Jonathan Hartiens, CEO of Mountaineer Recovery Center and a former lieutenant commander in the Navy, shared his lifelong experiences with both military service and substance abuse treatment from the perspective of someone who had not struggled with the disorder himself but someone who had fought for years to help others find recovery.

â€œI came from a military background, and then, in my own adulthood, I went into the Navy and was a Navy psychologist,â€ Hartiens said. â€œFor myself, not being a person in recovery or someone who struggled with addiction, ironically, my duty stations were to set up substance-abuse treatment facilities at different Navy bases. After I left the Navy, I came to the VA and ran the VA Center for Addiction Treatmentâ€¦ because I was a veteran and worked with veterans, I always had a strong desire to make sure the veteranâ€™s sacrifice was honored, and I wanted to make sure our staff and residents not only knew the importance of military service but were able to honor those sacrifices.â€

Hartiens said he didnâ€™t think people had much of an appreciation for the toll military service leaves on those service members even after they leave their respective branch, noting that often times it is seen as â€œout of sight, out of mindâ€ as is typically done with those struggling with addiction.

Echoing Hartiensâ€™ sentiment, keynote speaker Brett Simpson, a former major in the Army and CEO of Operation Welcome Home, told those in attendance the trials he faced as he strove for military excellence while deteriorating under the grip of a rampant alcohol addiction triggered by various personal tragedies. It was an addiction he said led to multiple failed attempts at recovery at various recovery centers and programs and an ultimate suicide attempt that made him realize he had to change, because there was no coming back a second time.

â€œThrough all of this, there is a message of hope and help and recovery,â€ Simpson said. â€œI thought I had lost everything. I made a pact with myself which I know with all of my heart I cannot break. I have to stay clean, refrain from my urges, and I had to do it for myself. Because I knew, and still know, my next rock bottom will be way too deep to recover from.â€

Simpson said through dedication, determination and an unwavering thread of hope, he found his recovery and now loves his life with his wife, 6-year-old son and a repaired relationship with his 13-year-old son and his 17-year-old stepdaughter who he has only ever loved and treated as his own.

Simpson said thanks to those heroes and veterans the public may not always get to meet, the public is able to strive for a life free from addiction and encouraged those present to hold tight to that thread of hope, knowing there is a brighter future ahead for those who truly fight for it.

As part of ceremony proceedings, Staff Sgt. Dwayne Harris, Army retired, and his wife, Command Sgt. Major Elizabeth Harris, Army retired, dedicated a veterans flag to the facility and shared their own stories of substance abuse recovery, encouraging the residents to learn when to say no but, more importantly, when to say yes to caring for those around them, giving back to their community and fighting for their own bright futures.

Hartiens also noted the facilityâ€™s desire to honor those veterans who had lost their lives to suicide with a bell-ringing tribute by Dorothea Wyatt, who rang the bell 22 times in honor of the average 22 veterans and service members who commit suicide daily.

In addition to heartfelt speeches and musical tributes, the ceremony also recognized those staff members and residents who had served.

Names will not be printed of those residents who were honored during the ceremony to ensure privacy. However, three were honored as Army veterans, and one was honored as a Naval veteran.

The ceremony closed with a reminder of hope and a prayer preaching joy, resilience and a deep love for one another presented by Paula Porter.