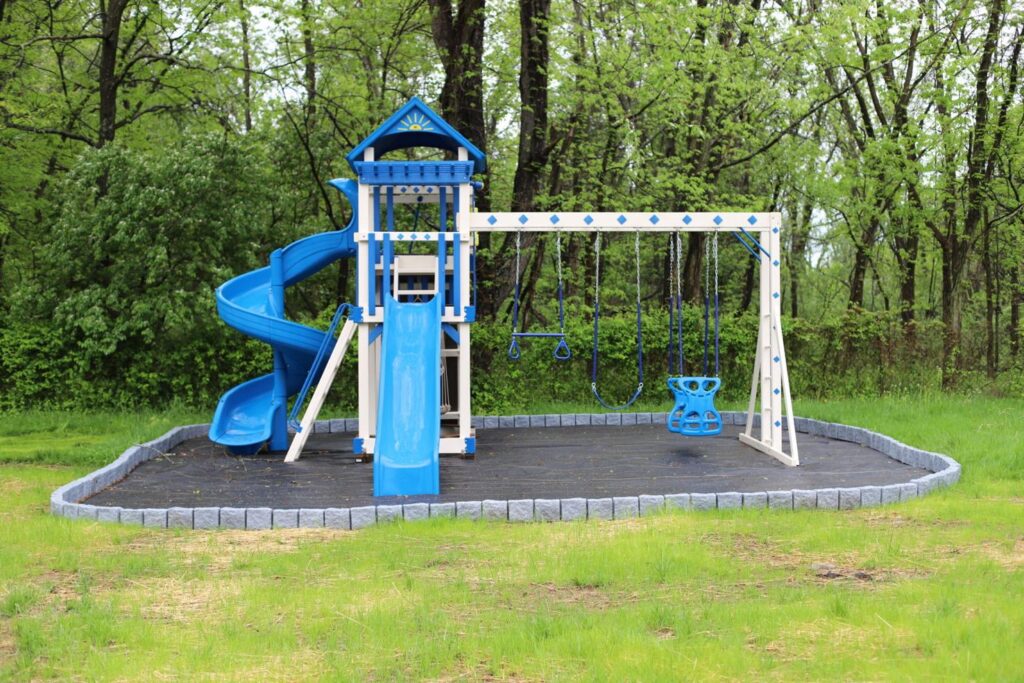 MARTINSBURG â€” In keeping in line with its mission statement and addressing one of its seven avenues of focus, the Rotary Club of Martinsburg donated a $10,000 commercial grade playground to the women and children of the Ashley House in Kearneysville.

A sober living home specializing in keeping children with their mothers throughout their recovery, Ashley House opened last year as a partner project between Mountaineer recovery Center and Semper Libre in an effort to help women of the Eastern Panhandle continue their journey through recovery by allowing them to keep their children with them during their time in the home.

The Ashley Houseâ€™s effort to keep families in tact while mothers continue to battle their addiction was a key factor as to why the rotary decided to make the Ashley House the recipient of one of their larger annual projects, President Pam Wagoner explained.

â€œRotary has seven avenues of focus, and one of them is the health and well-being of women and childrenâ€¦ so, as the Rotary Club of Martinsburg is celebrating their 100th anniversary this year, we wanted to make sure we gave back in a big way to an area of focus within our community. We are so proud to be able to give something so needed to our local recovery efforts.â€

Wagoner explained that the Rotary Club of Martinsburg is a part of a larger district, District 7360 and, as such, makes donations to the Rotary National Foundation annually.

After three years, a portion of those donations are returned to the individual clubs and can be used as a matching grant with the district to fund the various clubâ€™s community projects, Wagoner said.

â€œWe had given really heftily three years ago, so when we found out our matching part would be up to $5,000, we were extremely excited to just go with it,â€ Wagoner laughed. â€œWe, as a board, decided to reach out to Kevin Knowles with the Mountaineer Recovery Center to see what we could do to help with the opioid epidemic recovery efforts locally. He said we should do something for the new Ashley House, which is a product of the centerâ€™s collaborations with Semper Libre and supports women continuing their recovery while being able to continue caring for their children.â€

With the idea planted, Wagoner said the rotary club visited the Ashley House, saw the potential site for the playground and knew this was exactly where its funding needed to go.

Wagoner said once plans were set into motion, a local vendor was able to have the commercial grade playground completely installed in half of a day, including the border surrounding the equipment and the rubber mulch put in to protect children from the hard ground below.

Now that the project is officially complete and children are able to utilize the equipment, the rotary club, Mountaineer Recovery and leadership with the Ashley House have all shared their excitement at being able to provide a small space of outdoor fun for the children living in the home.

â€œThe playground further enhances the opportunity that Ashley House provides for the reunification for mothers and children,â€ said Krisandra Joia, residence and program manager for the Ashley House. â€œThe playground also gives the children something to do while theyâ€™re here and creates great opportunities for bonding moments between mom and child. Itâ€™s a wonderful gift.â€

The playground was officially finished in mid-April, but the ribbon cutting, originally scheduled for April 29, was delayed due to bad weather.

Wagoner said the rotary club still plans to hold an official ribbon cutting when schedules between all involved organizations can be finalized.